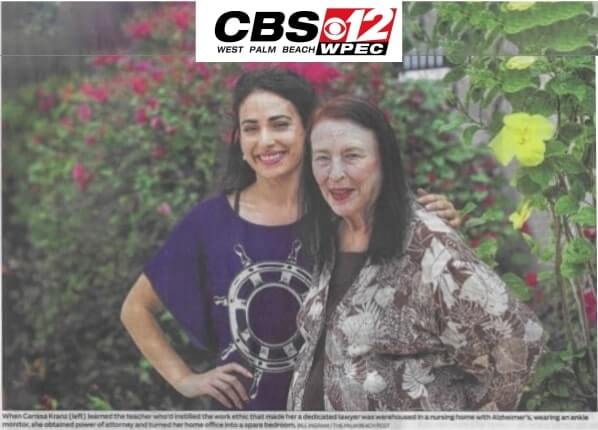 CBS12: Woman caring for former ballet teacher with Alzheimer's has no regrets

For the past thirty years Miss Joan Miller has been a part of Carissa Kranz’s life.

“She was like a second mother or grandmother to me,” said Kranz.

Carissa met Joan when she was just six years old when Joan taught her to dance at the Palm Beach Ballet Center.

“She ran everything from beginning to end at a time when women didn’t run businesses,” said Kranz.

Carissa danced for free until she left for college, but shortly after that the ballet center closed its doors for good.

Miss Joan was in the beginning stage of Alzheimer’s and had nowhere to go but a nursing home.

“When I saw her there it was just devastating, because it wasn’t the person who I remembered who was always happy and smiling and ready to go,” said Kranz. “Instead she was in a ward room with five beds. Her hair was completely white and she was alone.”

She was alone with no one to turn to.

But what Miss Joan did have, was Carissa.

“I had my second bedroom here and that’s when I decided to quit my job and do something more meaningful to me and move her into my house and start my own law firm,” said Kranz. “I was 29 years old my mom thought I was nuts, my dad thought I was nuts everyone around me thought I was throwing my life away. Most people said I wouldn’t be able to do it.”

Carissa was able to do it and now six years later she’s still making it happen, taking care of Miss Joan with a little help every day.

Quiet is not how Carissa remembers Miss Joan, but one thing about her hasn’t changed, Joan is still a teacher.

“The disease has taught me a lot about the present moment, kindness, compassion, and how to forgive,” said Kranz. “If we get into an argument she doesn’t remember. In five minutes she’s going to totally forget and be all back to love.”

Making it work has never been easy for Kranz but it has always been worth it.

The number one thing Kranz has learned is that the time is now and the best way to live is in the present.

Because Alzheimer’s patients live in the now Kranz created NOW watch bands where 100 percent of the profits go to assist Miss Joan’s care and to Alzheimer’s Community Care to continue their efforts of opening specialized day centers.

You can also donate to Miss Joan’s care through GoFundMe.

This story was featured on CBS12.