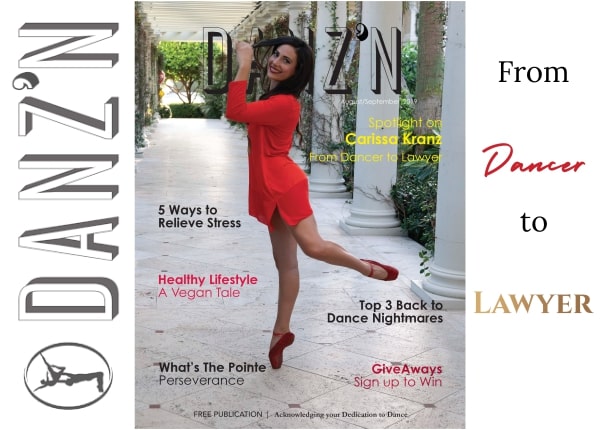 DANZ’N is celebrating its 10th year anniversary. The first issue was published in December 2009, featuring Joan Miller of Palm Beach Ballet Center, whom interestingly is also part of Carissa Kranz journey. In this issue we are featuring Carissa Kranz, a prominent dancer put her ballet career aside to become a lawyer instead, which in turn afforded her the opportunity to return to her home and pay it forward to her teacher and mentor, Ms. Joan Miller, of whom she has now become the caregiver. Please read this amazing story on page 20 and see the full interview on Danz’n Magazine’s YouTube channel.

Before founding her own law firm in order to be a caregiver for her ballet teacher, Carissa had it made. She worked as a prosecutor, a law clerk for the California Supreme Court, Capitol Hill Correspondent, legal counsel for a law clinic, she passed the bar in Florida, New York, and Washington D.C., she was a Berkeley Law and Northwestern University Masters graduate and by 29 years old, she was making six figures as a litigation attorney at Greenberg Traurig in Palm Beach. But, she gave it all up when she learned her ballet teacher needed help.

Making six figures at a big law firm didn’t fulfill my soul. That wasn’t my dream job. I craved a more meaningful existence for myself, and I felt called to do something about it.

And she did. When Carissa learned her ballet mentor, Joan Miller of The Palm Beach Ballet Center, was warehoused in a 1.5 star nursing facility wardroom with 5 beds, no family, and no advocate with a diagnosis of Alzheimer’s, the ballet dancer-turned legal eagle leapt to the rescue. Carissa witnessed her ballet mentor’s life unravel to the disease. Miss Joan lost her dance school, home to foreclosure, animals to animal control, dignity, and mind — but Carissa stepped up in ways few would. “I wanted her to thrive, not be warehoused to die.”

Carissa quit her six-figure law firm job, took over power of attorney, moved her ballet teacher into her home, and opened her own law firm so she could work from home to be a caregiver. Why?

She paid it forward by giving me free ballet my whole life. I was one of her star dancers, and I felt I had let her down by going to law school instead of joining ABT, and reaching my ballet potential.

Carissa danced circles around the legal system to get government services in place for Miss Joan in her home, all while being a caregiver, and building a successful multi-state injury law firm, The Law Offices of Carissa Kranz. In fact, Miss Joan was Carissa’s first injured client, and that’s how her law firm got its start.

Miss Joan, who is in the advanced stages of Alzheimer’s, is into her sixth year of living with Carissa. Carissa is providing her teacher with housing, caregivers, meals, supplies, and now performing for her teacher, in ways neither would have ever dreamed. Oh, and Carissa had another rescued roommate to mention, Sugar, the sweetest blind cat.

“Everyone said I was throwing my life away.”

Instead, her life took off. After a year of changing diapers, showering, feeding, and crushing pills for her ballet teacher, The Palm Beach Post featured Carissa’s caregiving story and, Carissa’s life changed. TV personality Nancy Grace read the article, and was so touched that she personally invited Carissa, the girl from Jupiter, to CNN headquarters to be a legal eagle on her show. Carissa, a performer at heart, became a regular TV legal contributor on the national circuit for shows and networks like Nancy Grace, Dr. Drew, Fox News, CBS, NBC, CNN/HLN, and was eventually hired as a TV anchor on Law & Crime with Dan Abrams.

Carissa doesn’t just walk the walk, and talk the talk, she waltzes. Staying true to herself, and consistent with her huge heart, Carissa took her law firm and newfound media influence to new heights.

I believe in compassion and justice for all injured beings, and that includes animals.

THE LAWS THAT MATTER

While Carissa is an award-winning multi-state attorney, running a law firm with global reach, she is most inspired when practicing Universal Laws — The Laws that Matter, her book in the works on Spiritual Laws. “We live in a law-based universe, and we all have the right and ability to practice law. Our existence is our birthright.” The book teaches legal procedure as a tool so we can all live our best, most divinely inspired lives.

Carissa is living proof that Universal Laws work when we strive to live karmically correct, or en pointe. For updates on the book release follow @lawsthatmatter and visit: https://carissakranz.com/spiritual-laws/

NOW CAUSE BANDS FOR ALZHEIMER’S

Even though she is ‘losing her mind,’ she’s still a teacher, teaching about mindfulness. As a child, she taught me that when dancing, time stops; as an adult, she teaches me daily to mind only the present moment, as Alzheimer’s patients do not live in time, they live in moments — they live in the NOW.

“The Only Time That Matters is NOW.” — Carissa Kranz

Consistent with Carissa’s caring heart, passion for justice, and push for conscious consumerism, Carissa started a non-profit: the NOW Movement Foundation. Carissa and Miss Joan both wear silicone movement bands that look like a watch but just say — “NOW.”

NOW bands can be purchased online on Etsy by clicking here. All NOW band proceeds go towards her continued care and the Alzheimer’s cause.

FROM BALLET DANCER TO BOSS

Carissa gracefully transitioned from prima ballerina to boss and attributes much of her life success to ballet.

“My best schooling and character building was done in the ballet studio. Ballet teaches discipline, commitment, dedication, and how to successfully tackle challenges through hard work. I am who I am today because of ballet.” Carissa’s mom was a professional ballet dancer and Carissa was literally dancing from the womb.

My best schooling and character building
was done in the ballet studio.
~ Carissa Kranz

From ballerina, to lawyer, to caregiver, to law firm owner, to CEO, I asked Carissa how she manages to balance all the moving parts. “I still go to ballet. Ballet training perfects the art of movement. If you can’t live your life in motion, and find balance, what’s the pointe!?”

Good point, Carissa! No surprise the ballet-dancer-turned lawyer can turn a phrase.

This article was published in the August-September 2019 issue of the Danz’n Magazine. You can read the online version of the magazine by clicking here.[/vc_column_text][/vc_column][/vc_row]

"You can't put ballet into words. That's why we da